Before we hit the airport to return to Saigon, we wanted to see Marble Mountain. It’s conveniently on the way to the airport from Hoi An. We had no excuse not to go before boarding our flight.

The name “Marble Mountains” does not originte with the Vietnamese, but is from the French. In Vietnamese, it is known as Ngu Hanh Son (The Five Element Mountain).

Originally named by King Minh Mang, the five mountains were once a favorite destination for the noble classes to visit and the religious hermits from the Japanese school of Mahayana Buddhism. The history of these mountains are traced to the Champa Kingdom from thousands of years ago.

During the Vietnam war, the mountains were near the American Marble Mountain Air Facility. According to William Broyles, Jr., the Marble Mountains contained a hospital for the Vietcong, “probably within earshot of the American air field and Da Nang Beach.” He describes the enemy as having been so “certain of our ignorance […] that he had hidden his hospital in plain sight”.[1]

How hard is the climb?

Even though the height of this site is between a big ass hill and a small mountain – don’t be deceived. My legs were shaking and aching with pain by the end of our trek up and down the sides of this mountain. If I ever return I will pay the extra $2 to use the elevator back down. You will sweat profusely during this trek!!! I’m not an avid climber/hiker so if you are, you’re probably not going to find this difficult, but challenging in a few parts when you scramble.

Wear suitable shoes and light clothing. Due to the marble and the amount of people who trek these mountains, the walking surface in some parts is EXTREMELY SLIPPERY. I wore sandals with no traction and ended up hiking this mountain barefoot because it was safer that way. Not the greatest idea!!!! Very dirty feet by the end. 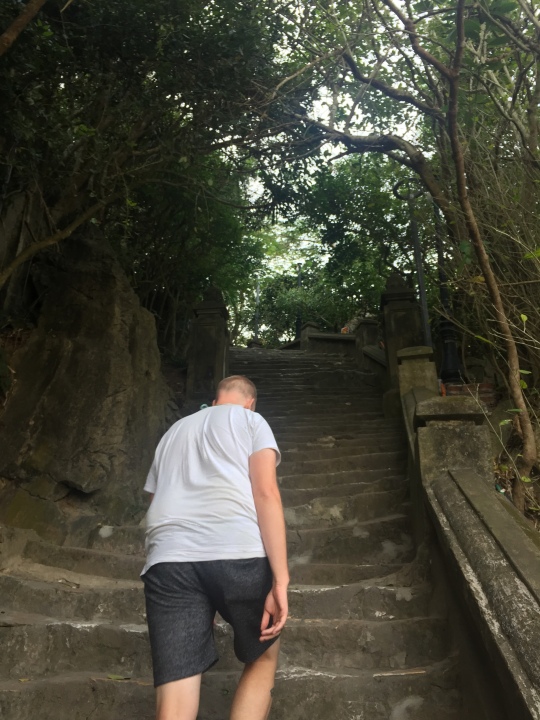 We begin the trek … 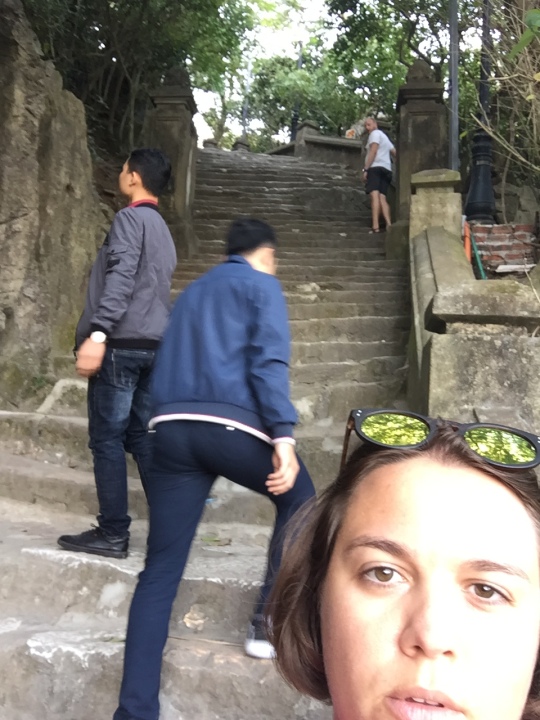 Paul wondering if I indeed will follow him up this treacherous stairway.

What does it look like? Mountain Grottos, Meditation caves, Tunnels …

The mountains have cave entrances and tunnels. Several Buddhist sanctuaries can be found within the mountains. The mountains are full of stone sculptures/structures, built out of the mountain’s marble.

We saw several Buddhist and Hindu grottoes. We climbed a stairway of 156 steps to the summit of Thuy Son. It boasts a panoramic view of the surrounding area and the other mountains. 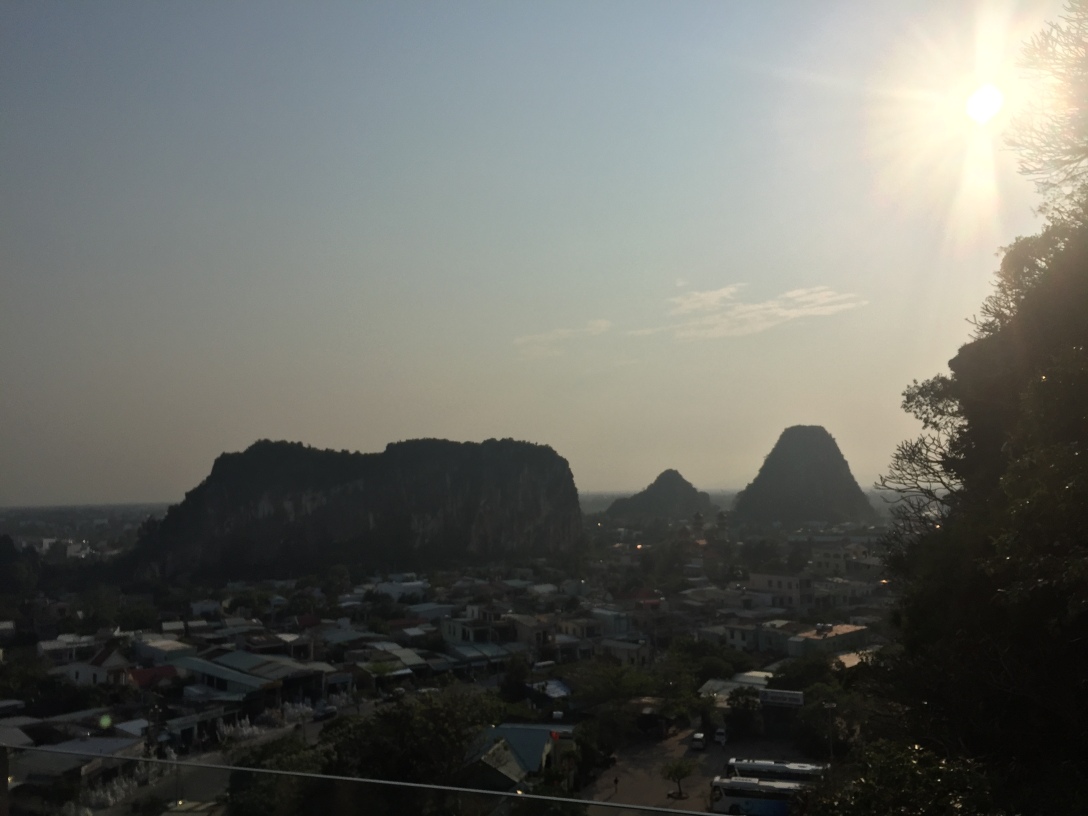 The Grottoes and Rock Art

The grottoes and the art in them was fantastic. Even though I bitched the entire time we were trekking it was very cool to go into the large meditation caves and the temple to see the artwork. 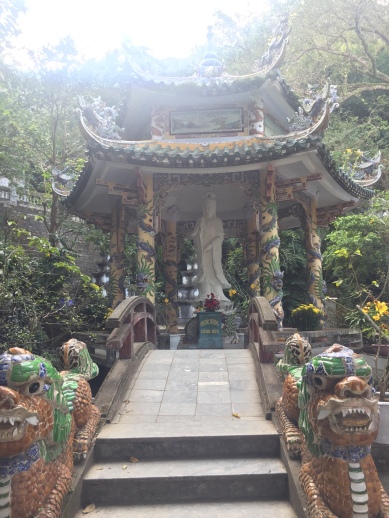 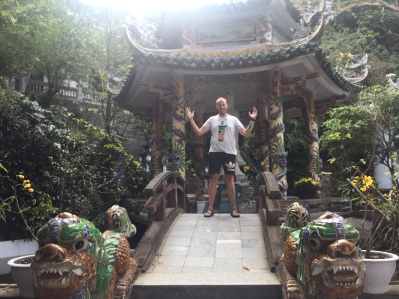 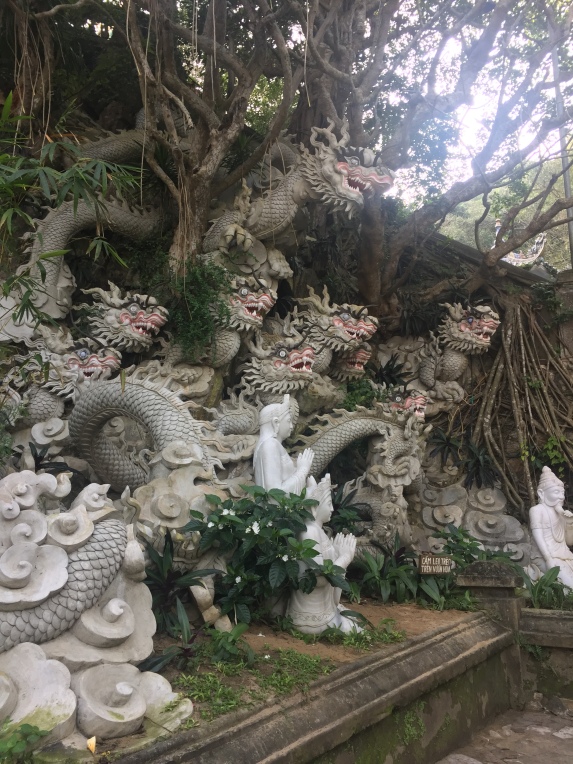 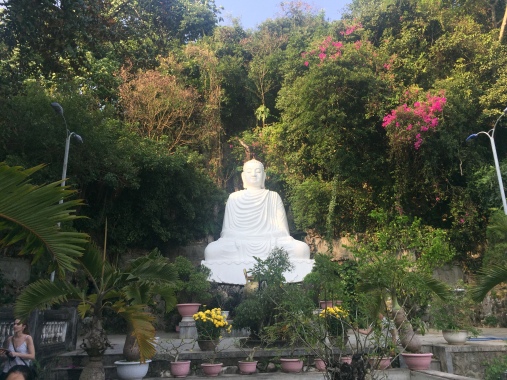 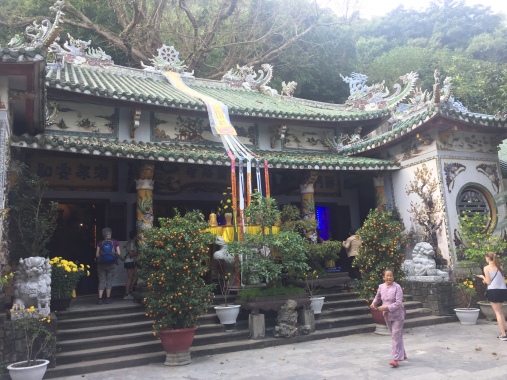 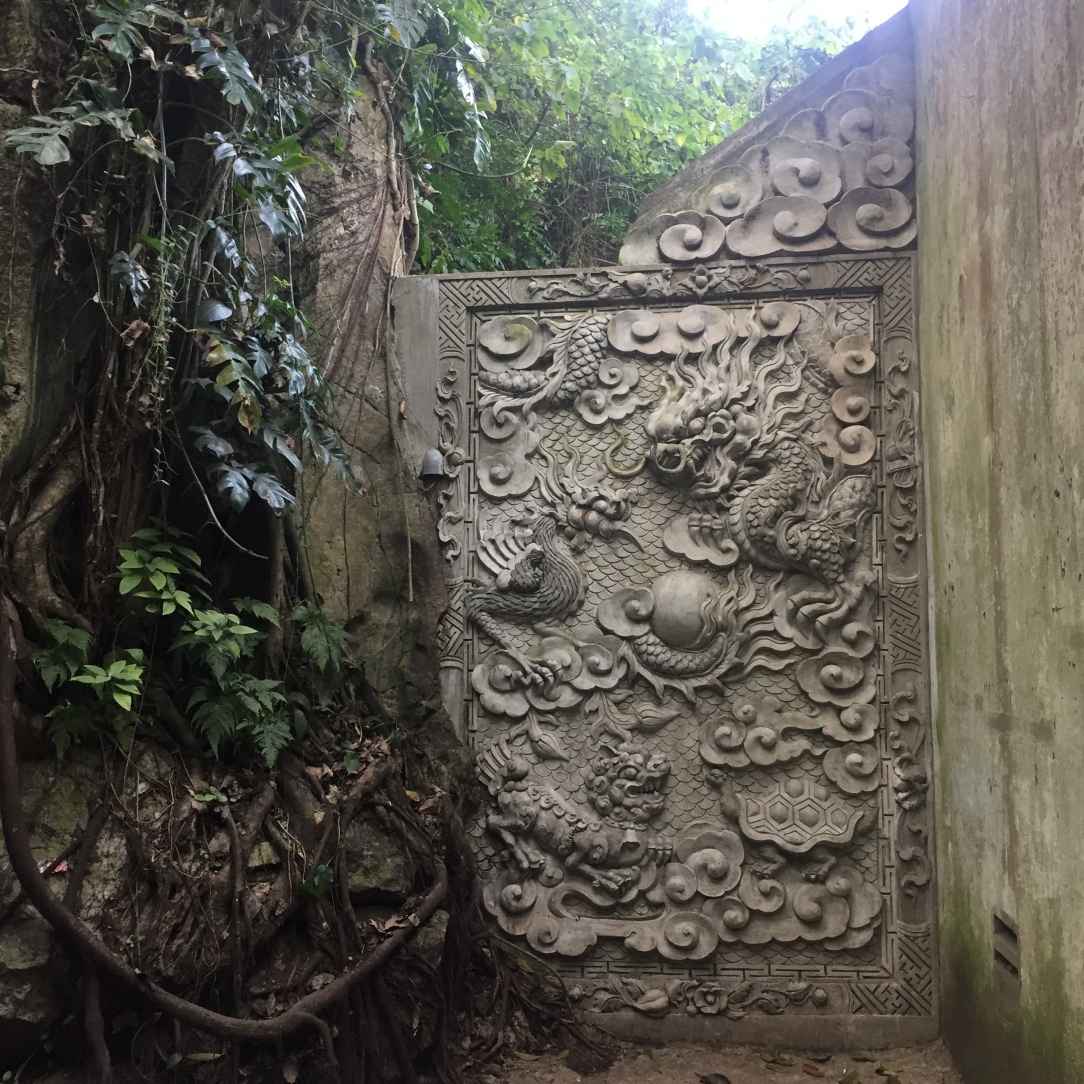 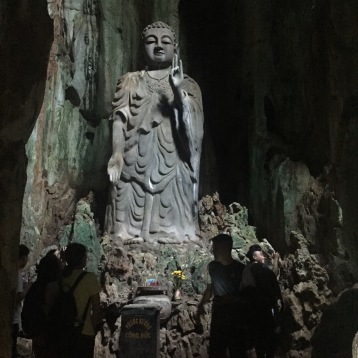 A Pain In My Ass

After hiking to the first summit we kept walking around the corner. We saw some meditation caves. Then we tried to go to one cave that you scramble up and out to the other side of the mountain. This proved too steep and claustrophobic for me! So I took the long way around and Paul attempted to reach the outside via the cave tunnel. It turned out to be a very narrow, slippery passage that looked like a dead-end. Not wanting to get hurt near the end of our six month journey, he turned around with the rest of the group.

Our final test was to get to the highest point of this small mountain/large hill. The view from the top was cool. But the top isn’t flat. It’s smooth boulders of marble rock that are really hard to stand on. I was sooooo sweaty by the end of this tourist trek that I felt grossssss. I felt so bad for the person who was going to sit on the plane next to me. Thankfully, I was able to take a “ho bath” on our way back to the airport and dry off while we waited for our flight back to Saigon.