On the Saturday of our Weekend stay in Hoi An we decided to see the ancient temples of My Son, located near Hoi An. You pronounce “My” as in “mi.” So “mi son” is how you say it.

In the morning a man came on motorbike and drove each of us to the travel agency. From here, we were picked up by a tour bus. The bus collected a few more tourists from nearby hotels and we were on our way to My Son. Paul and I had never heard of My Son until getting to Hoi An, so we had no idea what to expect.

We got off the bus, hit the bathrooms before entering the temple complex and grabbed some waters too. It was blazing hot!!! One of the hottest days we had in Vietnam. Like walking around in a sauna. 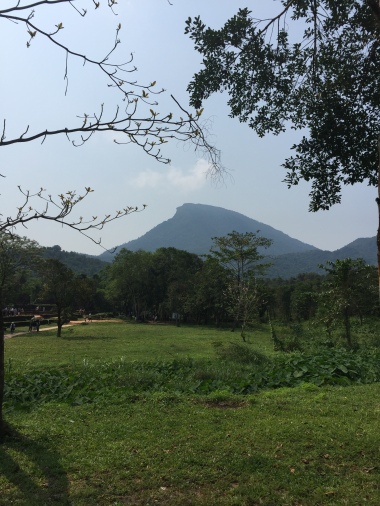 The Champa people built the My Son temples. Their construction left no gaps between the bricks – the same as Angkor Wat’s. Their brick making process included cooking the bricks at a lower temperature than normal. The soft bricks would then mould together. The mortar they used for the bricks was made from a mixture of tree resin, ash and honey. Remarkably, they would create their own “kiln” for the temple by setting fire to the whole temple structure for 3 – 5 months.

My Son is believed to be older by three centuries than Angkor Wat in Cambodia. Unfortunately, due to the crushing gravity of time and a SHIT TON of bombs – first from France in 1947 and then from the Americans in 1968 – there were once 70 temples and now it’s at 20 temples.  It’s a fragment of its original self.

Do I recommend going there? If you want to see an ancient temple and you’ve never seen one before, yes. But if you are planning to go to Angkor Wat, it does not compare. My Son is much smaller and less intact. That said, I still learned a lot from our tour guide and I appreciated his energy and enthusiasm in a heat that was hotter than Hades!!! 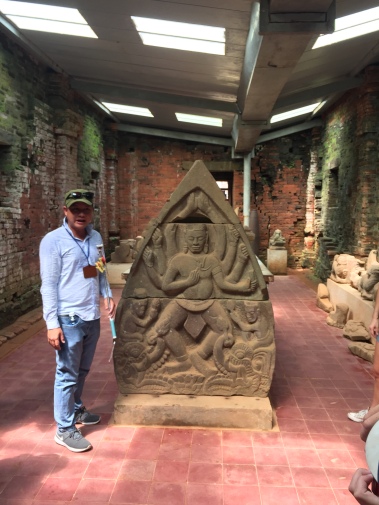 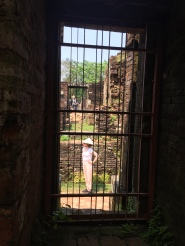 At the ancient temple site, we had a double take when we saw Roman style Columns laying alongside the ruins. Roman style columns in Vietnam? It is believed that Romans did come to Vietnam for trade and their architectural ideas came with. An interesting detail pointed out to us by the tour guide was the base of this particular column was a Lotus Flower.

While on our trip to My Son we met the wonderful Browns! We’re “featured” 😉 (just kidding!!!) in their blog post: https://familybrownworldtrip.wordpress.com/2018/03/08/champa-kingdoms-and-vietnamese-emperors/

The Browns are a family who live in Ireland and have been traveling the world for a whole year!!!! Catherine and Rog and their two kids entertained us with their traveling stories and how they came to decide to travel the world with their kids. It was inspiring to meet other long-term travelers and hear their story.

Before we met the Browns, I thought that traveling for more than three months was best left for the 20s and 30s crowd with no children. I couldn’t imagine travelling with kids or leaving a house or “steady” job behind to travel with kids. But, after meeting The Browns it made me realize it is TOTALLY possible to travel with or without kids at any point in your life. Age, money, and society norms should not discourage you from your travel dreams.

I can’t imagine the education the two Brown kids are getting while on their journey! What a cool experience to give your children! The Browns’ experience definitely gave me a new outlook on Who and When you can travel. The answer is: Everyone, and Anytime!!!! You don’t have to ask for permission.

I highly recommend reading The Browns world travelling blog Family Brown World Trip: blog: https://familybrownworldtrip.wordpress.com/  – They are way better than me at writing on a regular and timely basis 😉 They cover many more destinations than I have! They have spent the year traveling South America, Europe, and Asia. Their adventures include teaching English in a Hmong Village and helping on the farm, Borneo, Machu Picchu, Croatia, and feeding elephants in Chang Mai!!!!