According to Wikipedia, Hội An (會安) translates as “peaceful meeting place”. It’s a city on Vietnam’s central coast known for its well-preserved Ancient Town and canals.

While doing my research on this city, I learned that beginning in the 15th century and up until the 19th century, Hoi An has been a melting pot. It served as one – if not the largest – Southeast Asian trading post. People from all over the world came here to trade and transport goods. This is seen through it’s eclectic architecture, a mix of wooden Chinese shophouses and temples to colorful French colonial buildings. There are also ornate Vietnamese houses and the iconic Japanese Covered Bridge (dating back to the 16th-17th century).

Today the city is a tourism magnet. 120,000 people live in this UNESCO World Heritage Site. The city was awarded UNESCO status in 1999.

We were in Hoi An the last weekend of February. As Good Luck would have it we were there during Hoi An’s monthly Lantern Festival. Every weekend that has a full moon is celebrated by a Lantern Festival in Hoi An.

During the Lantern Festival it is customary to light water lanterns, making a wish and placing them in the canal in Hoi An’s Old Town canal.

Before heading out to the Lantern festival, we had dinner at our hotel with the rest of the guests. While we were traveling one of my favorite things to do was to meet and talk to other travelers. This is where we would get our best “tips and tricks” of traveling.

After dinner we walked to Old Town from our hotel. It appeared we had gotten there at the tail end of the night’s festivities. The crowds were dwindling but there were still a few locals selling lantern lights and canal rides.

Our only prospect for a boat driver was a VERY drunk boat driver. His friendliness was appreciated, but I have to say I was a bit concerned when we got into the boat. Typically the canal boat drivers will take you out for a while, up and down the canal. He really just got us out to the center of the canal and sat there for awhile. After finding out we were Americans, in between drunken laughter he kept on saying, “America” or “bombs! bombs! bombs!” Needless to say, it was an awkward topic of conversation and we did our best to listen to his words, but also not let that be the focus of the conversation during this lantern lighting boat ride.

After the “bombs” comments subsided the old man just kept making really funny jokes. He would laugh at his own jokes and then we couldn’t help but laugh. Laughter is contagious – a universal language. When he wasn’t making jokes he was offering to take our picture.

I was about to place my lantern in and the old drunk man insisted I put my hands in prayer position so I decided to take his advice. Why not! 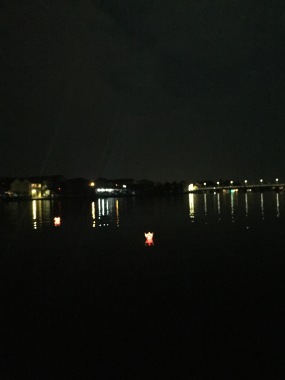 After we let our wishes and candles float away into the canal the old drunk man made me row the boat back to shore. This was meant as a joke but he literally made me row it all the way back so I think he was just tired at the end of a long night.

The next night we would come earlier and catch some of the festivities and lights. Dances, music, food vendors, a night markets and bars were thronged by tourists. 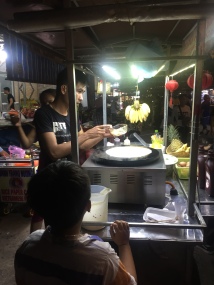 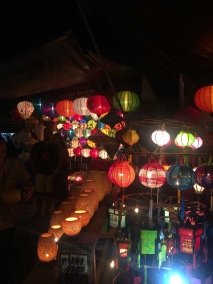 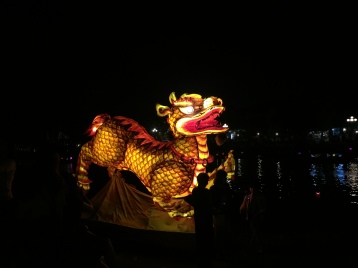 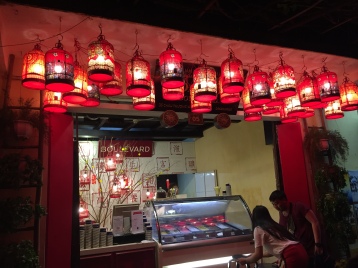 Seeing all the wishes floating down the canal was a truly beautiful moment to experience in Old Town Hoi An. I’d have to say, if you are a photographer, this is a must-see experience to take photos of. If you have the skills to capture the lights and water properly, the shots you will get are once in a lifetime and breath-taking.