During our traipsing through Asia we drank beers from Sri Lanka, Thailand, and Cambodia. They weren’t spectacularly complex in flavor or high in alcohol content, but still delivered the desired outcome when sitting sweaty on a balcony after a humid day of sightseeing. We hadn’t found any craft beer since going to a small bar in Florence, Italy back in December. Since then it had been the “cheap” stuff. Lucky for us, the craft beer scene in Saigon is alive and WELL.

Our first stop was Pasteur Street Brewing Company. This place is downtown, across from the Rex Hotel, down an alley. Yes, it’s down an alley, but you won’t be able to miss it. On your way there is a beautiful mural dedicated to Vietnam.

Pasteur had the best atmosphere which had us returning many times during our month-long stay in Saigon. It’s a small, two-story place with good ambiance and little pretense. The staff is the best and the beers highlight Vietnamese ingredients. Some of the beers we tried included: Passionfruit Wheat beer, Chocolate Stout, Spice Saison, and a Pomelo IPA. My favorite was the Pomelo IPA. How often have you had pomelo in your beer?! 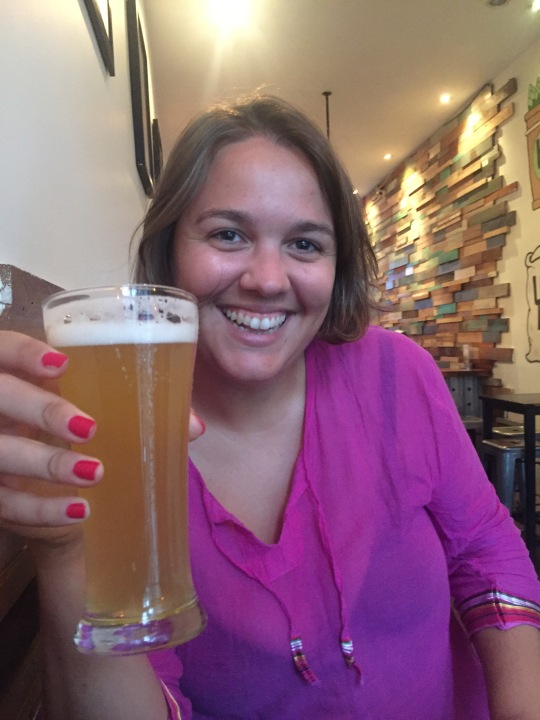 Their menu was also worthy of snack time, but I wouldn’t do dinner here. Western favorites like chili cheese fries and fried pickles were included. They also had a satisfying happy hour where each beer came with a free app. We couldn’t pass that up.

Any one holding a B.A. in English Lit will quickly notice this brewery’s name. I remember it well. Mostly, how hard it was to get through that book, but more importantly how it forced me to ponder the age-old question, “are we inherently bad when left ungoverned?” Many years later, Director Francis Ford Coppola would say Heart of Darkness inspired his film, Apocalypse Now. The brews here reference both cultural icons with beer names like, Kurtz’s Insane, Pitiless Folly, and Noble Cause. Their branding and design for the labels is on point.

It’s not all references and branding that make this a good brewery though. If that was it, people wouldn’t continue to go here for their craft beer. The beer is genuine and the atmosphere is laid back; a corner bar with good taste.

This place specializes in selling Saigon Craft beer from a number of breweries in town. Honestly, I felt like I was in a Portland, Oregon bar. Depending on your mood this will be a good or bad thing. They had shuffle board in the back and a clientele of local ex-pats.

Others great places to enjoy Saigon beer were:

Outcast Saigon’s outdoor bar space – with two floors – includes two rock climbing walls! So if you’d like to try climbing before you drink, they have weekly group climbing nights at the space!

Climbing walls at the bar: 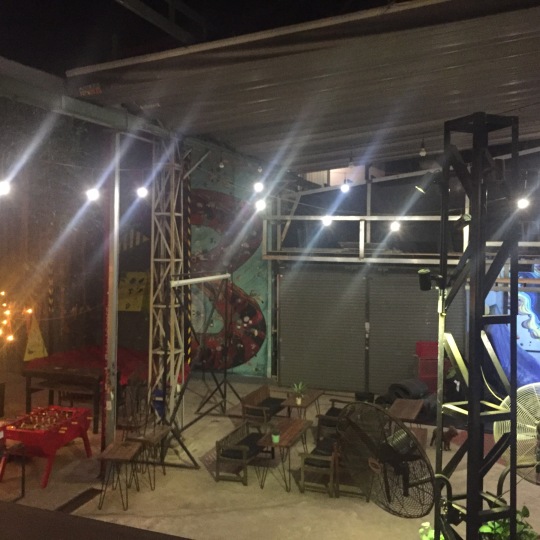 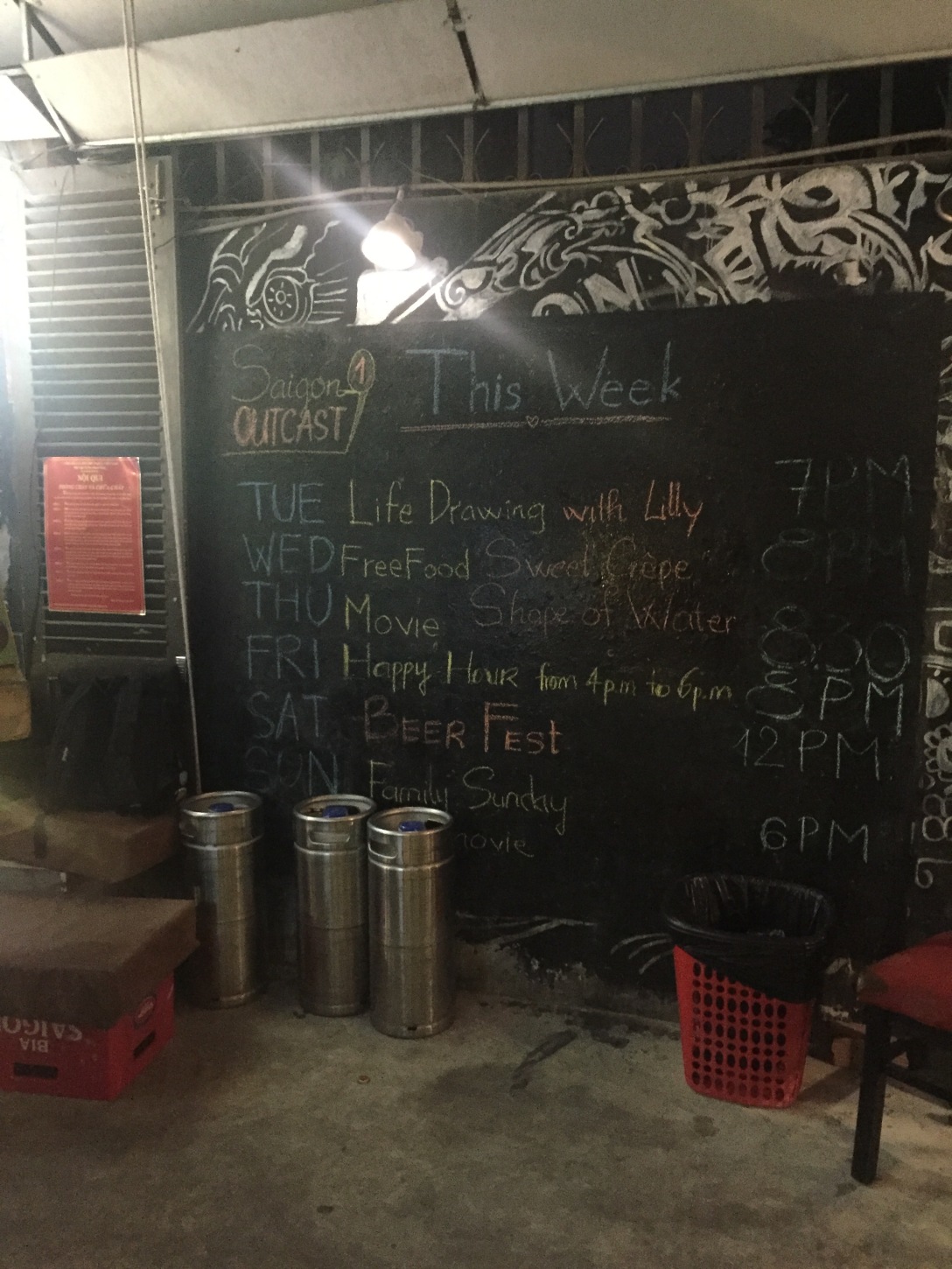 Sancho’s is located on the “party street” of Saigon. It’s owner is a Californian and can often be seen bartending and keeping the good vibes going at the bar. He welcomed us with two free shots of Tequila and lots of laughs!!! Lots of locals and ex-pats at this place, so be prepared for a crowded bar most nights. If you can’t find a seat at the bar, they have plenty of outdoor space, but I’d get there early cuz it gets crowded on weekends. I think it’s because they have such tasty and authentic Mexican food. A hard thing to find in Asia. 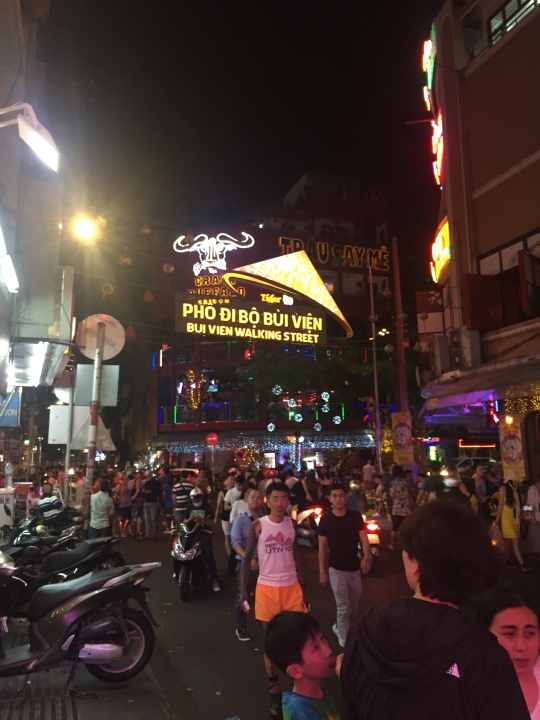