After some well spent time in London, we got on the train and headed up to Scotland from Tuesday to Sunday. After getting in last night we took showers and headed out to see the city before bed.

We got drinks and dinner a place called “the last drop.” I had assumed this name was referencing the phrase, “good to the last drop” – I was wrong! 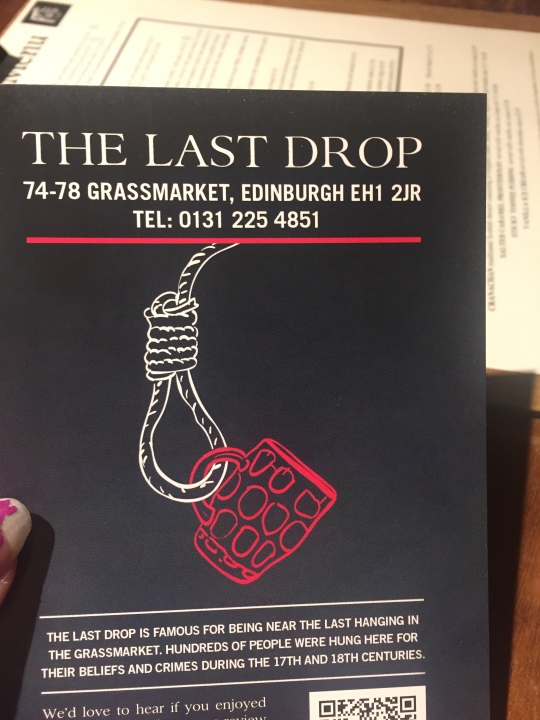 The restaurant is located in Grass market square. This square held the last public execution by hanging in Scotland. What?!

This is a good set up of how I feel about Edinburgh so far – delightfully sinister. If Edinburgh was a book series, it would be “A Series of Unfortunate Events.” The City is a bit ghoulish, but doesn’t take itself too seriously.

The city is very hilly, you are led to wind and weave while seeing witch and whiskey signs. WWWWW 🙂

Today, on our second day, we got up early to climb Arthur’s Seat. It’s a mini-mountain/really big hill that used to be a volcano. It took about 2 hours to get up and down the mini-mountain. The views and landscape were breathtaking!!! Rolling green and heather, a crisp wind and sun on your face. Once at the top we could see 882 ft above the city. One side was the Atlantic Ocean and the other side the city, both new and old parts of the city -modern and ancient side by side. 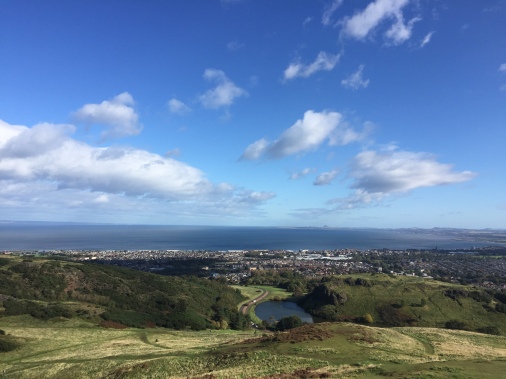 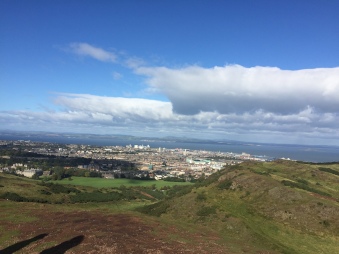 After climbing down we got lunch at a French place, Chez Jules. It was the only thing open in the new city part we were in but it was SO DELICIOUS. It was two courses, and an app and some vino 🙂 we had to fill ourselves up from the sweaty climb.

We both got terrines, I got coq au vin, Paul got steak frites. It was delish. We are going to France next week so this was a nice preview. The name of the restaurant is Chez Jules. It had loud Edith Piaf music and dropping candle sticks as well as the authentic food.

After a late lunch we got to pop into the National Gallery of Scotland. It was free admission (as was Arthur’s Seat). Although I have been spoiled by the immense collection DC has, their collection was small but rich. Each painting hangs on a deep burgundy wall, beneath which lies a Kelly green carpet. Then collection included stunning Italian Renaissance, Venetian school and Dutch art.

After we moseyed back to our hostel. On the way we saw a most talented and comedic busker who juggled flames and popped into a Harry Potter themed store that sold wands and all thing Potter. Finally at the corner store we bought Innis and Gunn beer as well as Irn Bru to try.

Irn Bru has long been the most popular soft drink in Scotland, with Coke being second. It is also the third best selling soft drink in the UK, after Coca-Cola and Pepsi. 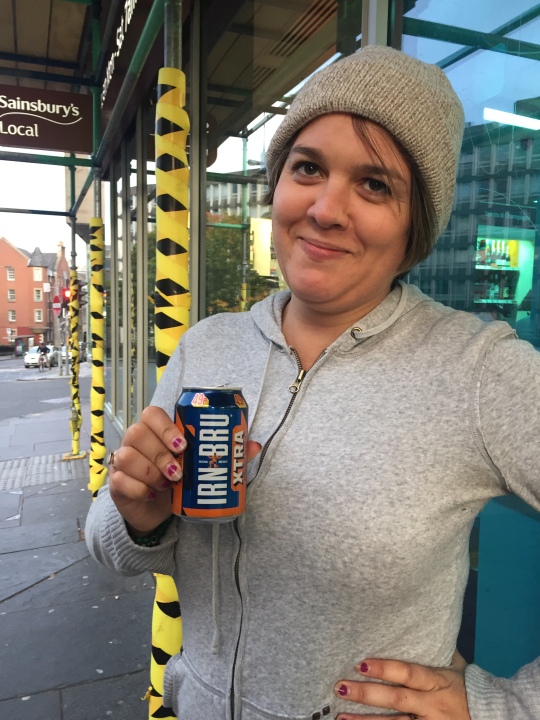 Tonight our hostel offered free dinner! Before dinner we went around and introduced ourselves. It’s so cool to meet people from all over the world! It’s cliche but you truly can find common ground with anyone and everyone has a story worth hearing. In hostels I feel the world is so big with so many people but the next minute when you speak to a stranger it feels small and familiar again. This is one reason why we travel: to see the new and different, to be reminded of the old and familiar.

Tomorrow we venture to the town of Dunbar. Paul’s last name is Dunbar “of the Dunbar clan” so we will be seeing what remains of Dunbar castle (ruins) and find his Tartan pattern. We also want to go on one of the many Edinburgh ghost tours tomorrow night. I’ll report back.

PS- I have met three British dogs on this trip so far. All have been named “Bob”