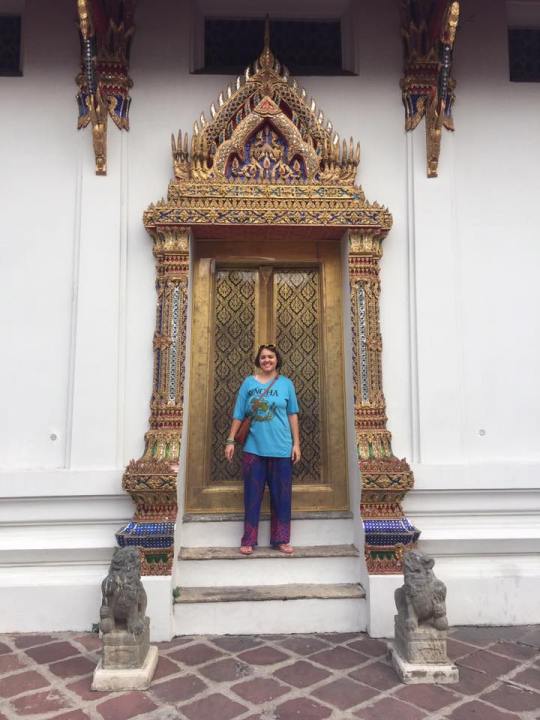 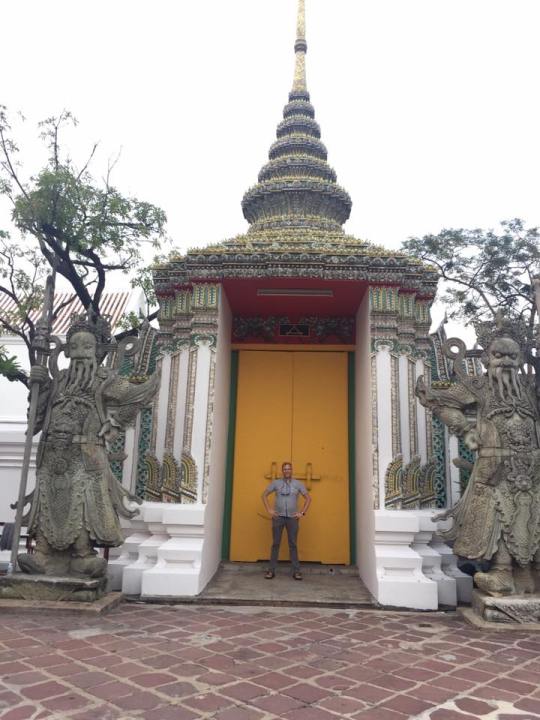 During our last afternoon in Bangkok we headed to Wat Pho. Originally, we were going there to get a couples massage. Wat Pho is the name of the temple complex. In the complex, not only do they have dozens of temples, statues, and sacred art, they also have a rather famous massage salon.

The massage salon is the Wat Pho Thai Traditional Massage School. So, the masseuses there are either graduates, instructors, or students in the program. Unfortunately it was too crowded and weren’t able to book an appointment or a walk-in. So I’d say, reader, if you want this special treatment, get to Wat Pho early in the day, book the massage, then walk around and come back after seeing the temples. We used our remaining time to see as much of the complex as we could. 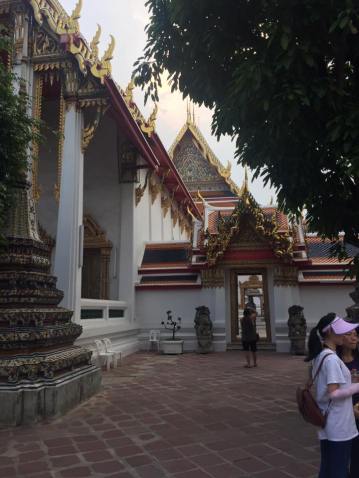 Phra Ubosot (Phra Uposatha) or the bot is the ordination hall. This is the main hall for performing Buddhist rituals and is the most sacred building of the complex. When you go in you must take your shoes off outside and sit pretzel style in front of the bot. You are not allowed to stand around taking pictures because it’s a sacred space. However you can take pictures if you’re sitting. But remember, don’t sit with your feet stretched out in front of you. This is seen as pointing your feet to Buddha which is a “No No!” – I saw some tourists be politely reminded of this by the bot monk. 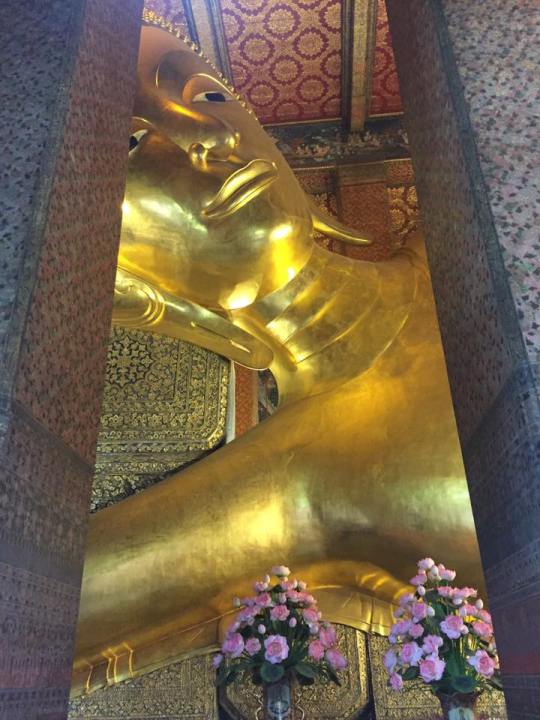 The temple and the reclining Buddha were built in 1832. The Buddha is 49 feet high and 150 feet long. It is one of the largest Buddha statues in Thailand. The bottom of Buddha’s feet are 9 feet high and 14 feet long. They are inlaid with mother-of-pearl – the most beautiful pedicure I’ve ever seen!!! The mother of pearl looks very cool – it’s swirling and inlaid in a black bottomed sole.

The right side of the temple’s wall is lined with 108 bronze bowls. These bowls represent the 108 auspicious characters of Buddha. For a small fee, you can buy coins to drop in these bowls. It is believed this act with give you good fortune. And hey – it helps the monks maintain the beautiful temples you are visiting. 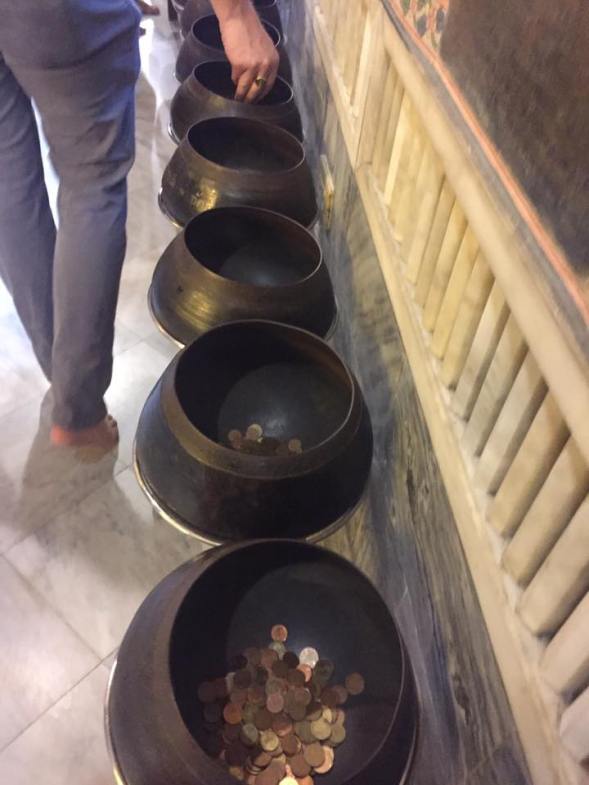 The Reclining Buddha was definitely my favorite thing we saw in Wat Pho, but the whole complex is a photographer’s dream. Lots of beautiful tiled roofs, gold buildings, and rows of gold Buddha statues. 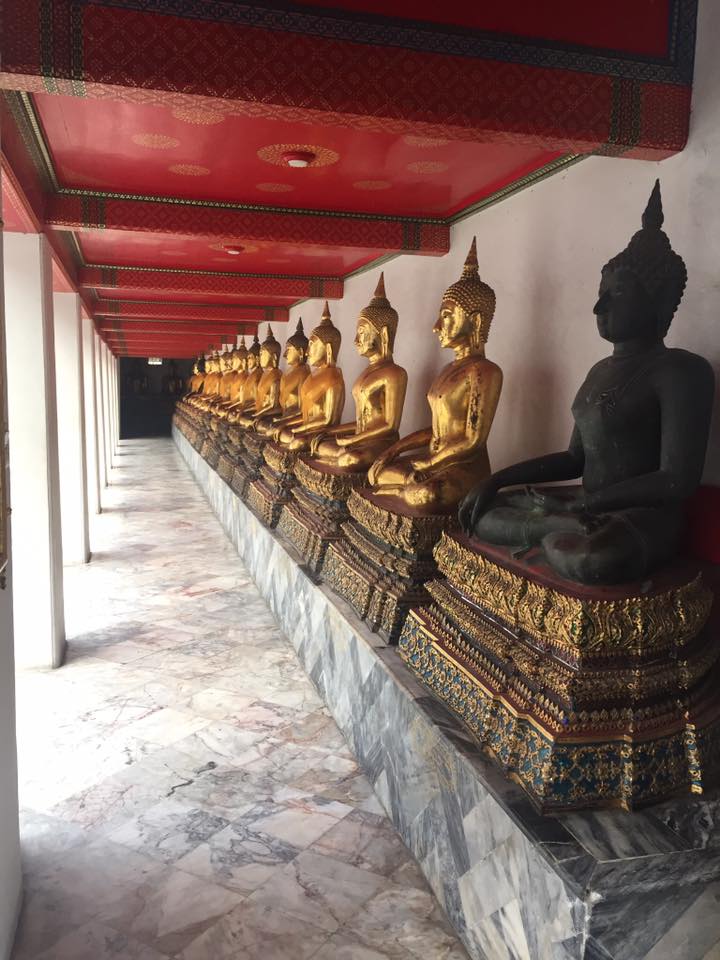 One thought on “The Reclining Buddha of Wat Pho”