After our time at the farm, Nok took us to two floating markets, Damnoen Saduak and Amphawa.

When you get to Damnoen you can walk along the canals, visiting souvenir shops, restaurants or food carts. You can also hold a python around your neck like Paul did. 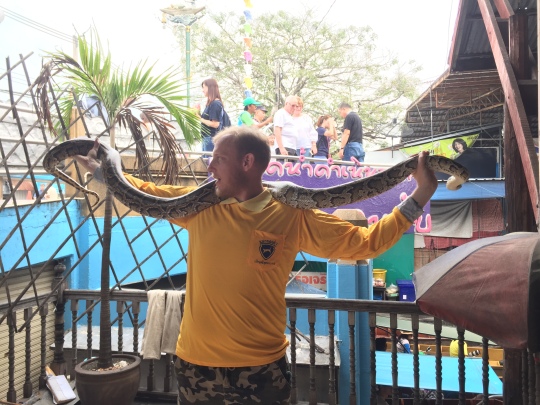 I highly recommend paying to ride in a canal boat. It’s better than shopping in the market around the canal.  You can pay one of the many canal drivers and they will take you for a 30 – 45 minute ride. Once you get in the boat, your driver will take you up and down the canals, stopping every so often at various stalls. You can also buy food and drinks while floating.

It’s fantastic to ride around, see the sellers, artists, tourists, and tradespeople – a people watcher’s dream.  Floating around you are many smells, sounds, and voices. It’s crowded but I’d say it’s the sort of overwhelming that is fun.

We each got a few coconuts to sip on, then Nok and Paul got noodle soup from a nearby boat.

We perused the stores. If we seemed even vaguely interested in a stall the boat driver stopped. He also stopped when we weren’t interested because I think he had some sort of deal with certain vendors so they could make money. When we stopped at a particular stall Paul saw a bat. A dead, taxidermy-ed bat. I thought he was joking when he was talking to the lady selling it, but as they got into a heavy haggling session, I realized this bat was probably going to come home with us. Paul was raised by an antique store owner/dealer. He haggles with the best of them.

About 15 minutes later after an intense haggling he got that damn bat for next to nothing.  We named it Buster. Buster the bat. I don’t know if the decision took place before or after our first tall boy Singha, but I believe the Singhas contributed to the timeline of these events. 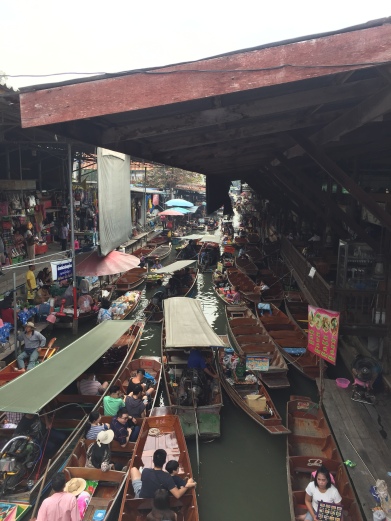 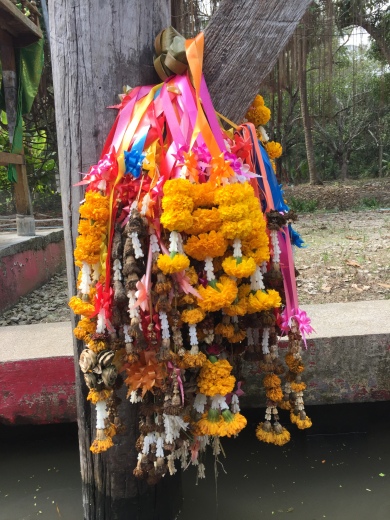 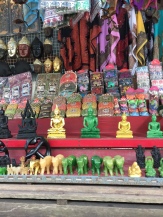 The second market was bigger than Damnoen Saduak, but I found more stalls were on land than water. Since we’d gotten the “experience of floating” at the first market, for this one we chose to walk around and eat. 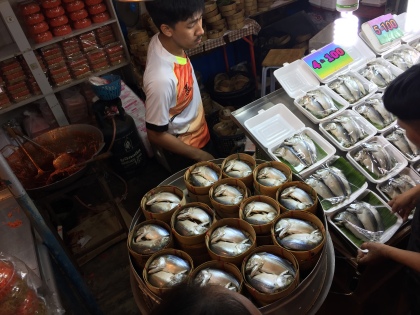 We ate lots of Thai street food! We had:

Pad Thai that was made by a lady on a boat

Banana candies – caramelized bananas, cooked down in a pan to a sweet paste, then formed into candy Tootsie roll like shapes

Fried/saucy fish meatballs on a stick

lod chong Singapore – It looks like little green worm-like squiggle shapes. It’s made from some sort of plant and flour pasta/rice paste. The green squiggle floats around in a drink similar to iced milk coffee or sugary vanilla milk.

Spicy mushrooms – someone was selling individual little mushrooms with a hot chili inside of them. We bought a bag. This was the first time on our trip I’d heard Paul continuously hiccup for 30 minutes immediately after eating the hot pepper inside the mushroom.

I got some little dim sum dumplings for myself. 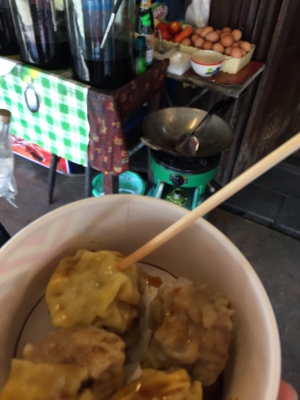 Things I saw that I’d never seen before were: grass jelly, some crunchy fried fish, corn juice, and huge prawns that when were raw were a bright blue color. 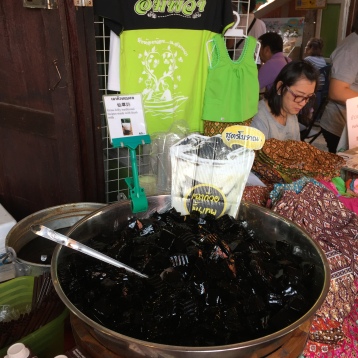