After enjoying a relaxing week in the sleepy beach town of Hikkaduwa we headed north to the mountain town of Kandy. Kandy is a 5.5 hour car ride from Hikkaduwa. Kandy is one of Sri Lanka’s major cities. We booked a week there intending to see all the sights in Kandy as well as ride the famous train ride from Kandy to Ella.

Our first day in Kandy began with taking a tuk-tuk from our hotel located in the mountains down into town. There were pros and cons of where we stayed.

The pros were that the hotel was beautiful and really affordable in price. It was nice to “treat ourselves” with AC, a big room, big bed, and a balcony overlooking the misty Kandy mountains. The views from the hotel were jaw-dropping.The rooftop was also a great place to sip Lion beer and watch the sun slip away behind the mountain range every evening. The staff offered incredible hospitality.

The cons were the hotel was not located in the most convenient place to travel to and from. Seeing as it was WAY up in the mountains we didn’t want to stay out too late at night. The few times we went up the mountain in a tuk-tuk at night it was difficult to ride the rough dirt roads safely in pitch black darkness. Thankfully we had skillful tuk-tuk drivers – and God Bless them cuz there were a couple of times I had no idea how they got us up the steep mountain in their tiny tuk-tuks. Sidenote: my favorite tuk-tuk was this Pirates of the Caribbean one we got frequently:

We didn’t love was the food at our hotel. It was overpriced and low quality for what you got. We had to have dinner in town before we went back up the mountain – there was no going up and down easily. The final con – and a weird one i think – was one night a woman from another room opened the door to our room with her key. We contacted front desk and it still remains a mystery how this woman was able to open the door to our room. I have no idea. It was definitely off-putting. Is it possible that all the keys open all the doors???? Still haven’t solved that one.

Once we got into town on the first day – down the mountain – we stopped at a busy “bakeshop.” I don’t know why they are called this, but I kept seeing what seemed like bakeries called, “bakeshops.” Foodlands had great breakfast baked goods; spicy veggie roti, fish rolls (cooked, chopped up fish rolled inside a pastry that’s fried and then rolled in spices) and buns that had hardboiled eggs, meat, or veggies inside with curry sauce. Since Ceylon tea reigns in Sri Lanka, we split a pot of tea instead of drinking our regular coffee. 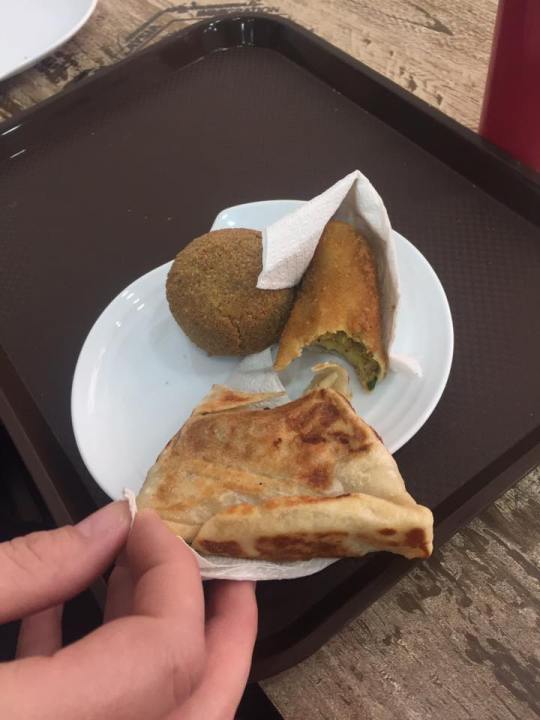 After a quick breakfast we walked to the Temple Of The Tooth. It is believed that long ago an Indian princess named Hemamali smuggled the tooth of Lord Buddha out of India by hiding it in the bun of her hair. The tooth is believed to be of Gautama Buddha, on whose teachings Buddhism was founded. The tooth is so special you can’t even see it on a regular basis. It is only open to public viewing for special holy/Sri Lankan occasions. What you do see is where the tooth is housed – in seven golden caskets. Think Russian dolls, but boxes inside boxes until the final one holds the tooth relic.

Needless to say, the temple is a very sacred and special place for Sri Lankans and for buddhist pilgrims. Before we went to the temple I learned some buddhist temple etiquette:

I had a shawl that I wore over my shirt and it was no problem. When we got into the temple entrance we took our shoes off and proceeded to walk the long path up to the temple. As soon as we entered we were approached by a very persistent man. He was a guide – a badge was hanging from his neck – and offered to guide us around the temple and give us “extra information.” We decided to take him up on his offer because we both are not familiar with Buddhist history and customs, so we figured his knowledge would help us appreciate the visit more.

Our guide began the tour by pointing out the statues in front. One is of Princess Hemamali and the tooth in her bun. He then asked us where we were from.

“Where are you from Gentleman and Madam?”

“America.” We both said this with some hesitation. Our current embarrassment of the President has not made it easy for us to be Americans abroad. The week before in Hikkaduwa we met a Dutch couple. They were really nice and spoke about their travels in Southeast Asia since we said we were headed there. They also asked us about American politics. They mentioned how surprised and disappointed they were when we elected our new President. They also mentioned how they were afraid he was going to start a WWIII with North Korea. And when I say afraid, I’m talking they were legitimately fearful. The rest of the world is watching our country – and they don’t like what they see. When we say we’re American, 98% of the time people look at us with pity/hesitation. The other 2% say – “I love New York City!!!”

After we admitted “America,” the inevitable came,

We chuckled and agreed. On all our travels thus far we’ve yet to meet a SINGLE person who likes the President. We’ve been to eight countries in the past five months. We’ve met a lot of different people.

“He’s bad man your President. He wants war! He talk about bombs! Madam, did you know that Sri Lanka has just gotten over a war? War is very bad. We had war here and it was very bad. This President – not good. I believe he is bad for the world.”

Our guide was alive during the Sri Lankan civil war. Our guide had seen what effects war has on a country and how horrible those effects can be. War isn’t a game or something to be tweeted about at 3AM. If you’re from a country that has actually experienced the effects of war – like Europe, like Sri Lanka – it’s easy to understand why you don’t take world leaders tweeting about war lightly.

I don’t tell you this story to upset you, reader, I tell you this to share my experience of being an American abroad when no one respects your government. It sucks and it’s embarrassing. Oh – this conversation was also a day BEFORE the infamous “shit hole countries” comment. I’m not even going to tell you how it got worse from there. Because it did. But that’s for another blog post … After being embarrassed by our president for the 50 bajillionth time, we proceeded to talk about the temple. 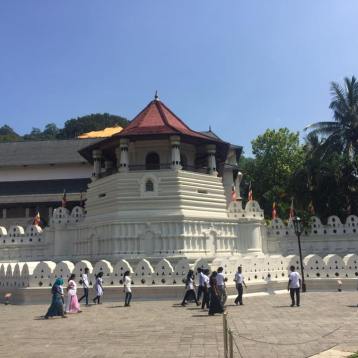 We took some steps up into the main entrance of the temple. To our right and left was a beautiful pond and at a table were flowers for sale. These beautiful lotus flowers in colors of purple, pink, white, and yellow were to offer Buddha when you got to the area where the tooth relic lives. Paul and I each bought some flowers. They were so fresh mine was even buzzing with bees crawling all over it. 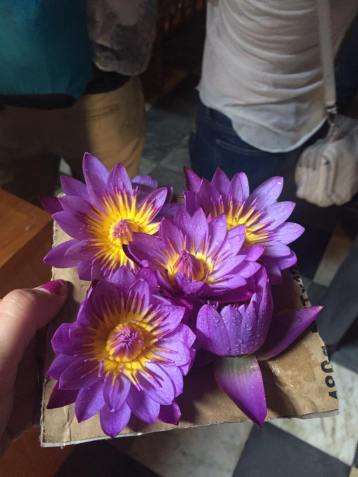 We climbed the stairs and the guide told us about the ancient architecture, the moonstone entrance ways, and Buddhism; the history, the beliefs, and the life of Lord Buddha. He also told us why the tooth and the temple are important to Sri Lankan history. The wood carvings, stone carvings, and the gold embellishments of this temple were out of this world. When we got to the Tooth we saw many Buddhist pilgrims praying on the floor, dressed in all white. People were praying and placing their lotus flowers in front of the tooth’s sanctuary. We placed our lotus flowers and snagged some pictures.

Next to the Temple is a museum for a giant stuffed Elephant. “Raja” the elephant participated at the annual Esala procession in Kandy for around 50 years. The procession takes place once a year in August and is a parade of 90 decorated elephants down the streets of Kandy!!! In 1986, the former Sri Lankan President J. R. Jayewardene declared Raja as a national treasure. He “resides” today in a museum next to the temple of the tooth. 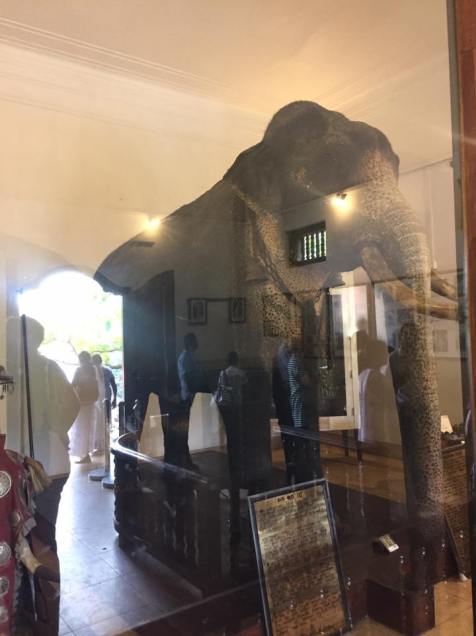 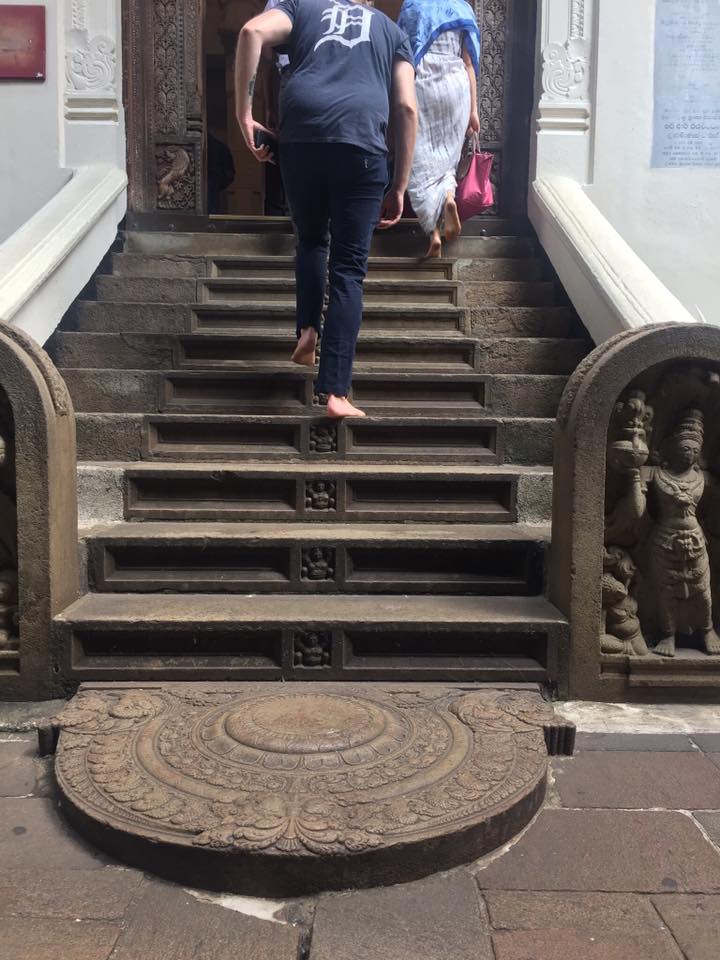 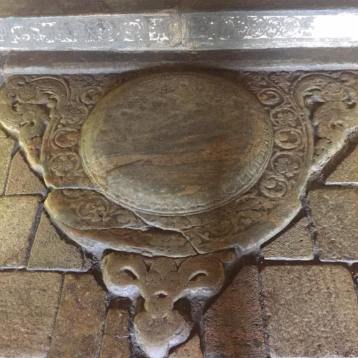 One thought on “Temple Of The Tooth”