The complimentary Ceylon pot of tea at the Ceylon Tea Museum gave us the lift in our sails we needed to see our last site of the day: Bahiravokanda Vihara Buddha.

On top of one of the surrounding mountains of Kandy is a huge white Buddha statue, called Bahiravokanda Vihara Buddha. You can take a tuk-tuk ride up the mountain and then climb the temple stairs to the top of the Buddha statue.

The only annoying part was being conned by our Sri Lankan tuk-tuk driver. He said one price then changed the price when we got out of the tuk-tuk creating a less than pleasant conversation. FYI this was the only time this happened to us in Sri Lanka. All the other tuk-tuk drivers gave us great service at extremely reasonable prices.

Once we got out of the tuk-tuk we took our shoes off and handed them to the temple front office. Then we climbed a set of stairs up the hill. Walking around the temple grounds we looked at the different altars and artwork on the walls. There was a monk chilling on a front porch of a temple house listening to his iPhone with earbuds. Everyone likes to listen to iPhones while they relax! 🙂 Of course I wanted to snap a picture of this modern/ancient image but I didn’t cuz that’d be rude.

At the base of the statue was a HUGE Bodhi Tree. You will see many Bodhi trees in Sri Lanka. Bodhi trees hold a special significance to Buddhists. According to religious texts, Buddha’s enlightenment occurred underneath the Bodhi Tree. 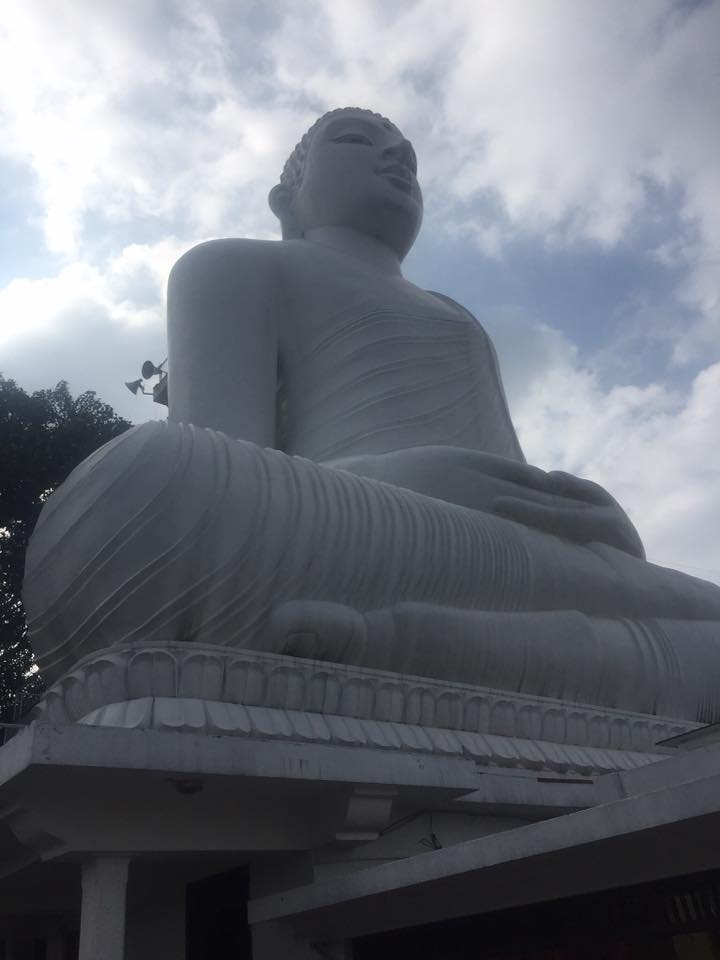 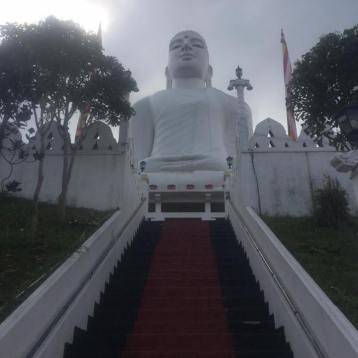 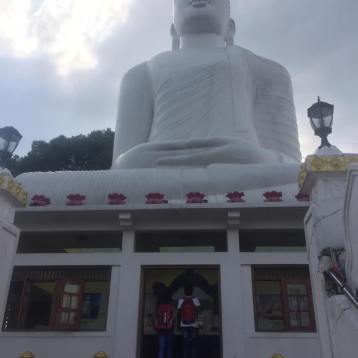 Each level going up the stairs of the statue included a small prayer room off to the side. Visitors are welcomed to go inside and see the decorations and altars within. 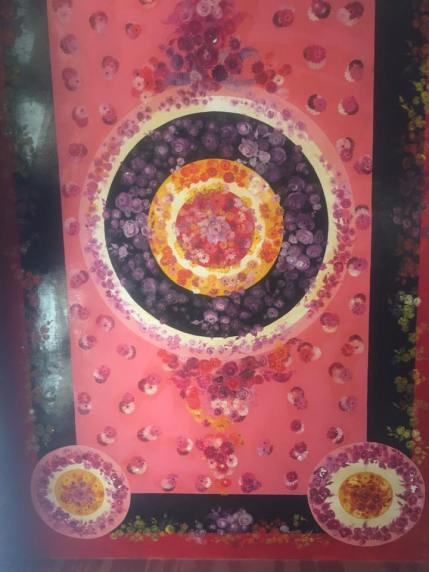 Not only was the Buddha structure beautiful to observe, but the position of the statue offers a great panoramic view of Kandy. 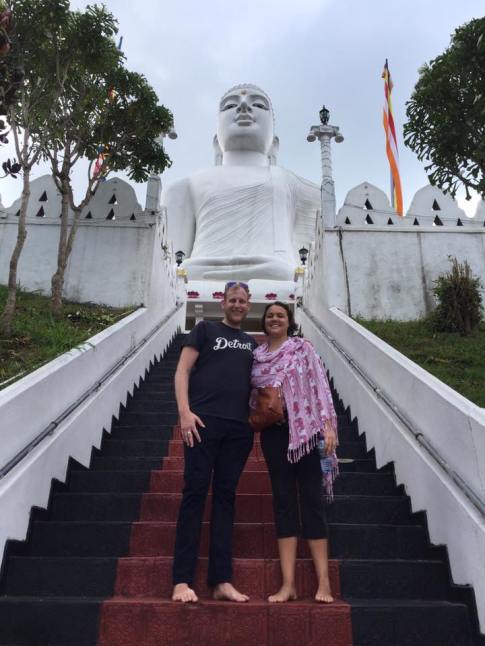 After our epic first day of exploring three major sites in Kandy we’d worked up an appetite. We hopped in our final tuk-tuk and headed to a restaurant Paul had read about on “the internets.” The reviews said this place was “authentic” Sri Lankan food. “Going local” when we go places is our favorite. We like going to restaurants that have lots of locals because we find the experience a) more authentic and b) better food. This dinner delivered.

The place we ate dinner was called, Muslim Hotel (Kandyan Muslim Hotel (Pvt) Ltd.). For me, it was a confusing name, but after some research it made more sense. It’s my understanding that in Sri Lanka when you say “hotel” you don’t necessarily mean hotel. You mean restaurant. We kept seeing restaurants with signs that included, “hotel,” but there was no hotel in sight only a restaurant. According to my sloppy and quick internet research one commenter on Trip Advisor says the reason for this “is in the past liquor-selling licenses in Sri Lanka were only available to ‘tourist’ places; hotels, but not local restaurants. To get around this rule, many places allocated one upstairs room as their ‘dummy’ hotel room, and then got their liquor license.” Reader, if you know why, please comment below!!!! As for the “Muslim” in the title, this refers to the religion of the owner of the restaurant.

Anywho – the food was very authentic; spicy!!! We got some meat/veggie rotis, curries of dhal, beef kottu, and pratha fry. The pratha fry was above and beyond my favorite dish we had while in Kandy. It was only halfway through the meal that I realized it was made of fried bread and not crispy perfectly greasy/oily noodles. That gives you an idea of the texture of this bread/it’s consistency when it’s out of the pan. The pratha is a thin batter bread dough, quickly fried in the pan, then mixed with anything from veggies to meat. The spices of this dish were the real deal. The spices took it to the next level in deliciousness. We came back – two days later – and got lunch/dinner there again. My favorite one was the egg/veggie pratha fry. 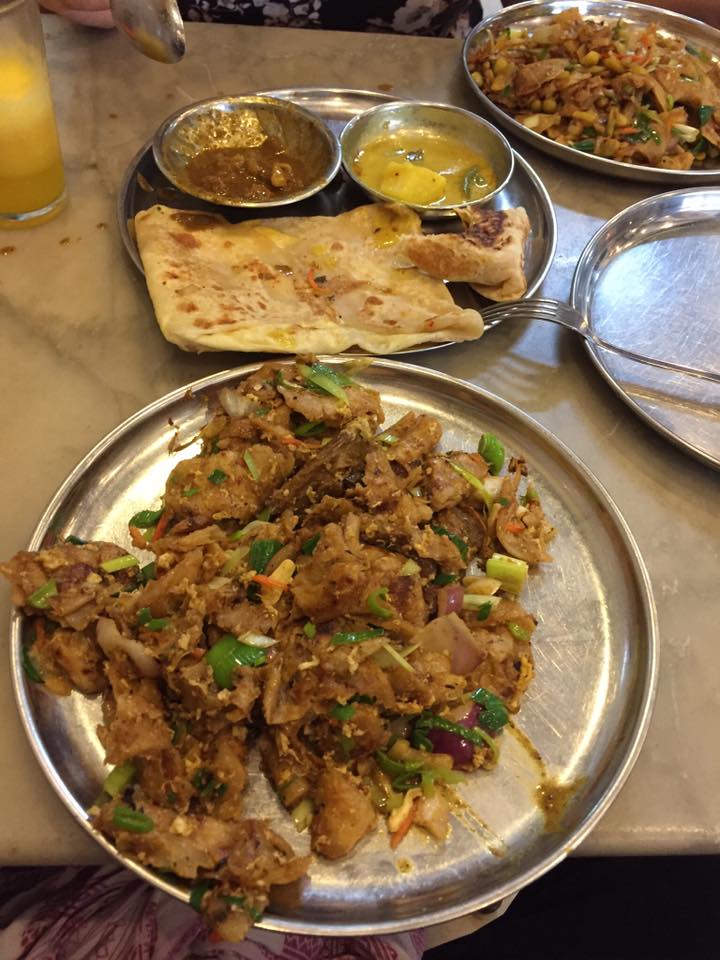 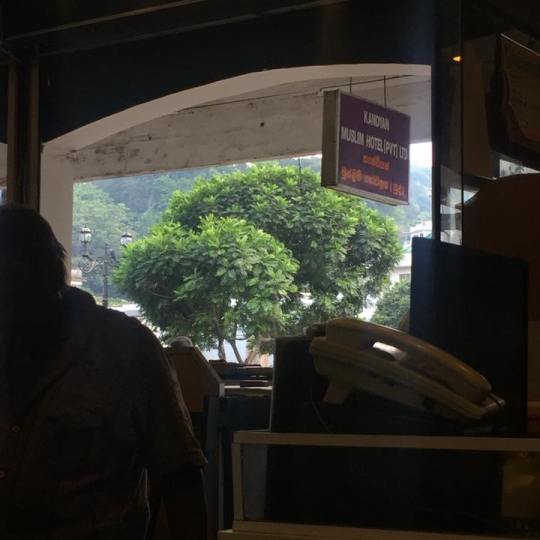 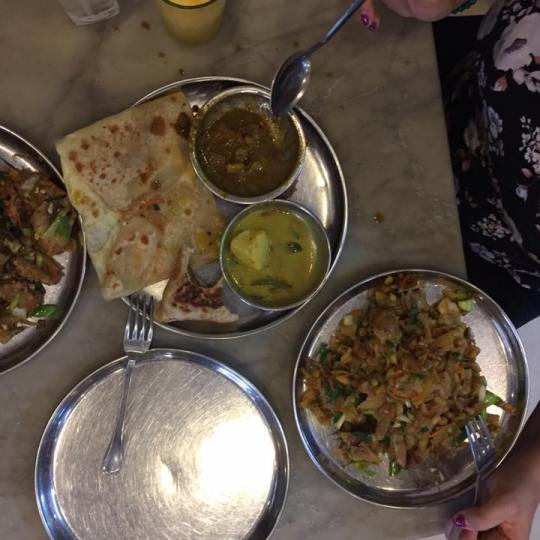 2 thoughts on “A Big Buddha and Paratha Fry”