We dedicated one of our days in Naples to visiting the ancient city of Pompeii. We took a train from Naples central train station and got off at the Pompeii stop. The line is called the “Circumvesuviana” line and the ride is 30-40 minutes to get to Pompeii. Get off at “Pompei Scavi (Villa dei Misteri)” stop. This is the ancient Pompeii stop and that’s the one you want. There is a modern day Pompeii next to the old one, but you won’t find any ancient Roman villas covered in volcanic ash there. 😉

At the stop we immediately found an office to buy tickets and joined a guided tour. Our guide, Roberto, met us about an hour later and the tour began at the entrance of the city.

I thought Pompeii was pretty straight forward: ancient city > natural disaster > discoveries are made thanks to archaeology and plaster molds. But there were a lot of things I learned about the city and ancient Roman culture I’d never known before.

Our first stop after the entrance was the small amphitheater where they would stage small operas, concerts, and plays (dramas, tragedies, comedies). Roberto asked if anyone was a singer. No one budged. Paul looked at me with a smile, pointed to me and confessed, “She can sing.” He giggled cuz he knew he got me into something.

I rolled my eyes and agreed.

“Then-a pleas-a, Savann-nah. Please-ah give us a concert in the center!” Roberto begged. Everyone on the tour sat in the amphitheater seats and I sang the first song that came to my mind. “Walking After Midnight” – a song I always sang in Austin and in DC with the bands I was in. I can testify the ampitheater has high quality acoustics and my voice resonated really well. I can now say I’ve sung Patsy Cline in an ancient Pompeiian amphitheater. You never know how your day is gonna go. 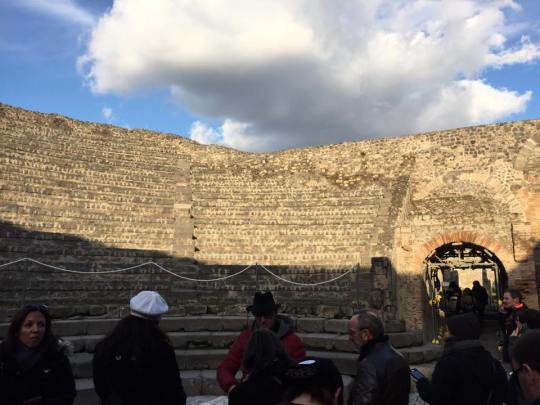 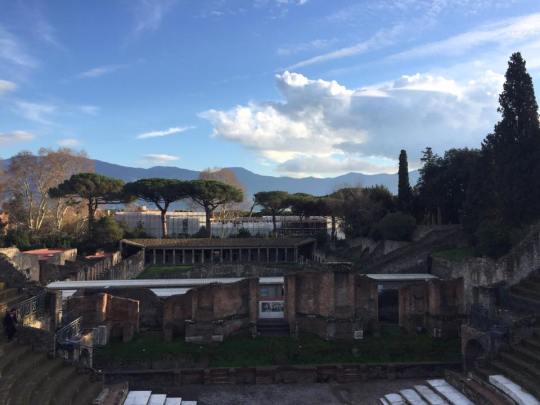 After the amphitheater we got to walking on main street. The street is made of large, uneven stones. You can see deep grooves on either side of the street where carriage wheels once drove. Roberto took us to the first house which was the house of a wealthy man, Vedius Siricus. On the floor of the entrance way to his house it reads, “Salve Lucru,” roughly translated to “Welcome Profits!” or “Welcome Money!” This was a man who valued money. He had slave quarters, a courtyard garden, painted fresco walls, and a large kitchen. The house dates back to the 1st century, B.C.

Around the corner from Siricus’ house we saw our first “fast food” restaurants in Pompeii. We had noticed that some ruins had marble stone counters with deep circular holes in them. Turns out these “holes” were small fire pit ovens where people would make “fast food” and sell it to locals or one of the many people who came to Pompeii for trade. They have found over 150 of these fast food joints in Pompeii. I don’t know if it’s because they liked fast food, so much as people from the lower classes or slaves may not have had the means to cook their own food in their small homes or access to ovens. 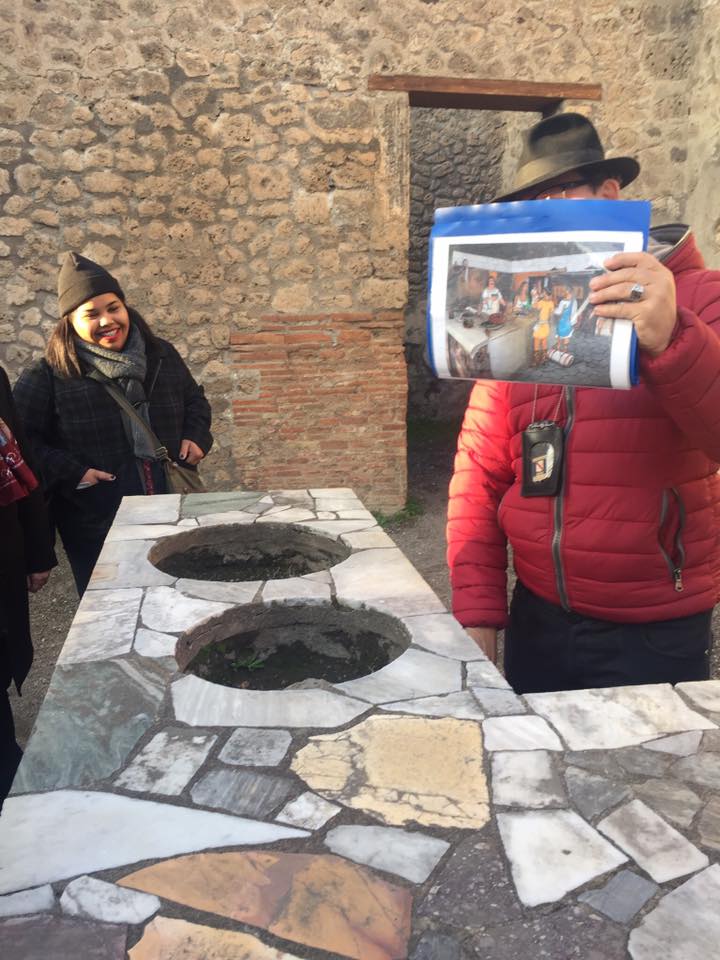 In ancient times, Pompeii was a town where the many wealthy of Rome retired. If you were an old politician, veteran of war, or older wealthy Roman you most likely lived in a city like Pompeii. It was a port city too, so every day many boats and people with goods were moving in and out of the city.

Up next were the Roman baths. I had no idea they had different temperatures of baths in ancient Rome. You could go to a bath and choose a cold, luke-warm, or hot bath. Obviously, the warmer the more it would cost. In the morning slaves would shovel coal under the baths into oven-like foundations to keep the bath at a specific heat.

The town’s one, “official” brothel was up next. This place is called “Lupanare.”  The Roman word for brothel was lupanar, meaning a wolf den, and a prostitute was called a lupa (“she-wolf”). It sucks when history is written by men, doesn’t it?

Walking into this brothel, I was really surprised by the size. For the “official” town brothel this place was SMALL. Five rooms with shitty small beds and ONE bathroom. Most prostitutes were enslaved women who were sold into prostitution. The slave trade was very popular in the Roman empire and if you were a recently “conquered” group, your fate may include being sold into slavery to serve the Romans. Above the doors were ancient paintings of sex positions. It was a gross feeling to be in there and it reminded me that not much has changed. We still have sex trafficking and we still have prostitutes who live in disgusting conditions.

We left the brothel and went on to see that down the street a penis was carved into the wall, as well as the other block over, a penis was carved into the street. So in the past twenty minutes I had seen even more ancient Roman dick after leaving Naples. This also made me realize not a lot has changed. Young boys still draw dicks in their lockers or in the back window of a snow-covered car.

After that we headed to the town square, the forum, and finally the larger amphitheater where the gladiators would fight for the crowds. If you’re a Pink Floyd fan, this is the same ampitheater where they filmed their 1972 concert film. It was cool to walk through the bottom entrance and into the stadium where the gladiators would have walked. It’s wild to think that these sort of places still stand when most American stadiums that are built now eventually get torn down or remodeled. The house I grew up in will most likely be gone in 100 years or less.

But Ancient Rome will always be here. 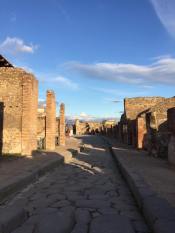 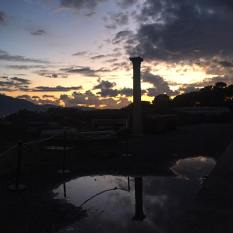